Creationism is stupid. Intelligent design is an imprudently oxymoronic term. 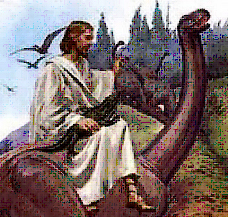 While belief in a divine creator is, in my opinion, misguided at best, it is not necessarily stupid; many intelligent people believe in some kind of God. God should be a matter of opinion, but sadly it is an instrument of institution and oppression. I can allow for this latitude concerning divinity as, speaking scientifically, there is a possibility, an exceptionally remote possibility, that God is real. On the other hand, speaking philosophically, I can happily and unequivocally announce that there is no God. This is a debate that will never be resolved. Creationism, and its misshapen child, Intelligent Design, however, is indisputably without any intellectual or scientific merit. While those who believe in it may have been led astray or not truly understand the nature of the argument, those who advocate Creationism/ID are committing acts of a most profound and disturbing level of intellectual deceit and moral repugnance. Creationism is quite literally a preposterous proposition; it stupefies me that people believe in it.

In the last few days (May 26th) it came to light that a minister in the Northern Ireland parliament asked a museum to, among other things, to create exhibits which displayed alternative views of the creation of the universe in the name of equality. One might hope this to mean that he wanted competing versions of string theory, planetary accretion, and the provenance of certain species, but sadly this was not the case. He was seeking out a space for the fatuous fallacy of Creationism. It seems some people need reminding of some very basic principles; Facts don’t care about equality, the Truth is not often politically correct, and Reality doesn’t give a damn about your feelings and opinions. The Creationists and ID cretins of Europe are using this new tactic of demanding equality for their farcical notions because their attempts to be accepted on the merits of their arguments have failed. Sadly this is not true of parts of America, such as Texas. Sure, they can have their exhibits in museums, but only if there is a laughing-track playing at all times, or a large sign saying “We apologise for the obvious idiocy of the exhibit but the law demands equality, and those Creationists kicked up such a fuss… Next week Geocentrism Rediscovered!”

Creationism and Ireland have an interesting connection.A man from Dublin by the name of James Ussher (sadly a bishop, but I forgive him for reasons which will become clear presently) decided that the world was created on the night preceding Sunday, October 23rd, 4004BC.You might at first think that this is a bizarrely accurate date, and then laugh at the preposterous proposition, but it is not as crazy as it first seems. First of all Ussher was writing in the early 17th century. The Enlightenment had not begun, the Scientific Revolution had barely begun to gain the momentum which would transform the following centuries; Ussher was operating under the accepted paradigm of the day. Hutton (father of modern geology) was over a hundred years away from proposing that the Earth was really, really, really old, and Darwin was over two hundred years away from pointing out the small fact of evolution. Ussher had no other option but the account found in the Bible. But even then Ussher, a great academic to whom historians and the Irish owe a great debt to for his exemplary work on our history, did his research. He didn’t just pull a number out of the air, he investigated many Christian and Jewish texts, he made exceptions for the inaccuracies of ancient dating systems, and he came up with the best answer for the data he had. You can’t blame him for making an omelette when all he had were eggs, even if what you really want is cake. Ussher’s academic achievement and impressive research might even lead one to think that he would dismiss his own theory, had he possessed all the facts.

Creationists who use this man’s work, or anyone’s work which came before the 18th century, are ignoring over two hundred years of scientific progress for no good reason. They are committing the crime of anachronism; they are taking the data out of context to suit their own personal beliefs. They then wish to impose their beliefs on others in a puzzling display of equality, a concept granted to them by the profoundly anti-clerical Enlightenment. Creationism was a perfectly reasonable idea before the Enlightenment, but to maintain a belief in it in the face of staggeringly overwhelming evidence from a variety of unconnected scientific fields is beyond ludicrous, somewhere in the region of the assuredly absurd. The desire to return to an age before science is utterly baffling, an era where most people died before the age of six, you were considered lucky if you reached your fifties, an era when a simple infection could kill you, and the diagnosis for epilepsy was demon possession.

In the modern, rational world we resolve conflicts with words. Creationism is the intellectual equivalent of anal leakage, a symptom of a serious issue that needs to be resolved promptly and most effectively with the aid of qualified experts. It is what toxic effluent is to a delicate eco-system; viciously corrosive, harmful to all forms of life, and it takes decades to repair the damage. Those who maintain their belief in Creationism, or its infectious offspring, must surrender all claim to the benefits the modern world has bestowed upon them; everything from antibiotics to the i-pod. Every scientific, medicinal, and industrial advance since the 18th century should no longer be available to them, as they are all founded on the very same principles from which we derive evolution, geological time, archaeology, and other such things with prove their crazy theories to be nothing but abject nonsense.

In this day and age, Creationism is a stupid idea which has no reason to be held by any individual. It was a valid notion at one point in time, like trepanning, and it did once fit within a paradigm which was widely accepted, but we have moved on. We found better, more elaborate and elegant ideas, and more interesting and stimulating answers for questions its proponents could never dream of. So, Creationism, and all your adherents in all their various guises, it’s time for you to join the absurd theories of the past, and become a historical oddity, a relic of ignorance. It’s time you left us alone. It’s time for you to just fuck off.

*While some might find the use of such language offensive , I believe that it is the only language one can use when dealing with such an abhorrent and insidious ideology as Creationism and its spawn.

3 responses to “Creationism, Fuck Off?*”